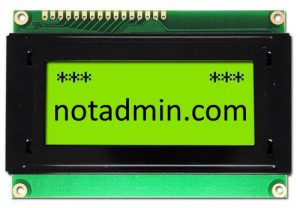 Display is a device that serves to display visual information.

To distinguish concepts, a display implies a part of a complete system, without which an independent display can be represented as a part. That is, for example, the phone has a display under the glass, and not a monitor (more about it below). Similarly, displays are equipped with calculators, electronic clocks, mobile gadgets, complex electronic machines, and so on.

Determining, how the display differs from the monitor, подчеркнём: we emphasize: for the operation of the display, additional nodes are required for providing it with power, receiving and transforming information, and so on. At the same time, the display, unlike the screen, is a specific electronic device.

The word screen has several meanings (homonyms), we are interested in exactly the technical concept. The definition screen is wider than the above definition.
For ease of perception, you can give a simple example: when we go to the cinema, we watch a movie on the screen. That is, the region itself, where the video sequence is broadcast, is not a technically-complex device (like a display), but it is called the screen.

From here we conclude: the difference between the screen and the monitor lies in the fact that the screen is the entire area of ​​the device surface, to which visual information is displayed in one way or another, but the concept of the screen does not include other components that ensure the operation of the display. 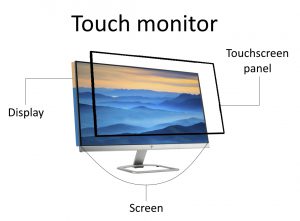 Monitor is an electronic device designed to display visual information received through a video signal.

To make it clear, let us immediately designate: the monitor in the depth of the concept is wider than the display. In the full sense, the monitor consists of a display, power supply, backlight inverter, circuit boards with signal conversion microchips and other components.
Roughly speaking, you can easily disconnect the monitor from one device, such as a computer, and connect it to another. In everyday life, computers are a prime example of using a monitor.

It makes sense to select devices that do not have a monitor: monoblock computer, cell phone, tablet and the like. All of these gadgets are equipped with displays, but in theory a monitor can be connected to each of these devices by an external connection if there are suitable interfaces and software support.

Touchscreen (TouchScreen, sensory screen) is a device used to enter information by touching its surface or other mechanical influences (pressure, electrical impulse).

The difference between the touchscreen and the display and monitor is that the touchscreen is not capable of displaying visual information, as it is a means of inputting it, not outputting it.
The touchscreen can be thought of as a transparent glass, with sensors and loops connected to it for connecting to information processing equipment, whether it be a phone, laptop, watch, or something else.