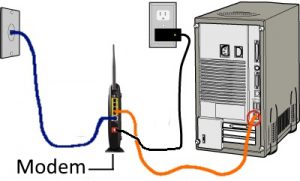 Modem (from the union of the words MOdulator and DEModulator) is a device that is designed to convert an information signal from its source to a consumer.

Roughly speaking, with outgoing traffic, the network information goes to the modem, where it is processed by the demodulator, that is, it is decrypted into a language understandable for the computer, and then it is available to the system.
When sending outgoing traffic packets, the reverse process occurs: the signal is converted by the modulator and only after that it is sent to the final network address.

Grouping of modems that is familiar to many users will be grouped by the method of connection and the type of networks used:

From the above, we conclude that the modem differs from the router in its main purpose, which is precisely in the signal conversion, and not in its distribution.

Router is a device designed to distribute information packets and network traffic between network participants.

However, the role of the router in building the network is different, here are a few tasks that are implemented by modern routers: