Plasma TV (gas discharge screen) - This is a device in which image acquisition is ensured by the emission of plasma produced from a gas under the influence of ultraviolet rays. 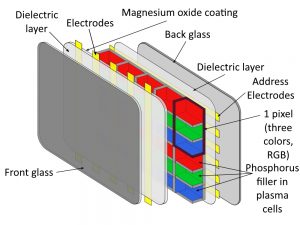 The device of the working panel of a plasma TV can be represented as a glass flask in the shape of a parallelepiped (box), inside which there is ionized gas, divided into sections. An electrical discharge is applied to these sections, provoking the occurrence of ultraviolet radiation. Under the influence of this radiation, the gas inside the plasma panel begins to luminesce, that is, glow, which gives the image on the screen.

There are three main disadvantages of plasma screens, which destroyed them in the fight against liquid crystal "competitors":

And, accordingly, the difference between a plasma TV and LCD lies in the display technology used, namely, that the gaseous image is responsible for displaying the image in the plasma panels. a substance whose ionized state is called plasma.

LCD TV (LCD) - a device based on the technology of using the properties of the transparency of liquid crystal molecules. 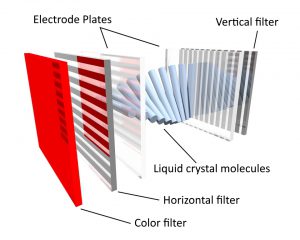 Immediately we denote that the LCD stands for Liquid Crystal Display нет.

In simple words, the essence of LCD panels is that between the electrode plates liquid crystal molecules, this whole sandwich is covered in color by filters. With the passage of the discharge between the electrodes, the crystals in this area are heated. Depending on the degree of heating, the coefficient of transparency of molecules that transmit light increases, which, passing through the corresponding color filters, displays the image on the screen.

The disadvantages of LCD monitors include the following:

Therefore, if you try to briefly define how an LCD TV differs from a plasma TV, then the main feature is the use of liquid crystal molecules in the structure of each pixel of an LCD.