Listening to music in the car is one of the few legal and safe ways to entertain yourself while driving. And if this occupation is overshadowed by the incorrect operation of the car stereo, then the process, of course, brings some discomfort.

In this article, we will continue the publication of publications one way or another related to automotive topics, opened in the topic of Setting up and registering the GPS tracker SinoTrack ST-901. Namely, let's talk about what to do if the radio tape recorder does not read all the songs from a flash drive, containing mp3 files, or does not play music from a USB drive at all.

Why does the car radio not play some songs

Let's start with the situation when we recorded several songs on a flash drive, brought it into the car, inserted it into the radio tape recorder, turned on the playback and found that the audio system does not play all the tracks on the media.
And it does not matter if you play music in a row or turn on the radio tape recorder with a random order of songs, some records are stubbornly ignored by the head unit.

Consider the main reason why a car stereo does not see all the songs on a flash drive. To do this, touch the structure of audio files in *.mp3 format.
The fact is that the MP3 file itself does not contain any information about the composition, only the audio track is stored in it. In order to add to the file information about the artist, the name of the melody, the album and so on, a special ID3 data format was "invented".

ID3 - data format that stores information about the contents of an mp3 file: artist, song title, album, release year, and so on

Later the format was improved to ID3v1 and ID3v2 versions (up to ID3v2.4), but the discussion of the development of the format is not included in our current plans. And we are interested in the fact that all audio players, when opening an mp3 file, read information stored in ID3. 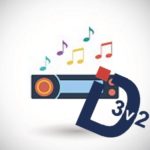 And if for some reason this information cannot be decrypted by the device’s software, be it a cassette player, an mp3 player or a stereo system, the file will be skipped.

Most often, the radio can not decipher the ID3 tag of a particular version due to problems with unsupported characters in one or more fields. In order to pinpoint the culprit of a track pass with a radio tape recorder, you need to know which version of ID3 tags the car radio reads, know which character set is supported, then you can determine by the search which value causes malfunctions.
But often there is absolutely no need to search for a specific unreadable tag, a 100% effective way to solve the problem, in which not all songs from a flash drive are played with a tape recorder, you can offer a complete removal of all tags of an mp3 file.

To begin, consider a couple of ways to remove ID3 tags mp3 files. There are two large groups:

The first conditional group includes all programs that can edit and delete tags from music files. Highlight the two most popular ones:

As for the standard tools for working with metadata of musical compositions, all the functionality is built into the Windows Explorer menu.
To change or remove mp3 file tags in Windows, we just need to open the Properties of this file or a group of files from the menu that opens when you click the right mouse button, go to the Details tab and at the bottom of the window click the Delete properties and personal information link. In the new window, we put a check mark on the item Delete the following properties of this file, after which we tick the necessary items and click on the OK button.
ID3 tags have been removed from mp3 file.

At the same time, removing the tags from the composition, we do not lose in the quality of the audio recording, do not interfere with the structure of the audio track, of course, do not touch the bitrate. The only obvious disadvantage of removing audio file tags is the impossibility of displaying the name of the track and the artist on the display of the head unit, if such an opportunity is implemented by software.

However, there are two things to understand:

In any case, everyone decides for himself what is preferable to him: quickly remove all the tags from the list of songs all at once, or find the very problematic tag that interferes with the standard functioning of the audio system and get rid of it.

The car radio does not see the flash drive

We reviewed the main issue of the article, but it happens that the tags from the mp3 file are cleared, and some of the songs from the flash drive still do not play the car radio, or the music from the USB media is not played at all on the car speaker system.
Below are a few possible reasons due to which the car stereo may not play music from a flash drive.

Why are some songs not playing on the radio?:

Now let's highlight a few common reasons why a car stereo does not play music from a flash drive at all, even selectively:

Above we have described the main reasons why it may happen that the car radio does not see a flash drive or does not read all the songs from it. Of course, the probability of physical or mechanical device malfunctions should be eliminated additionally.